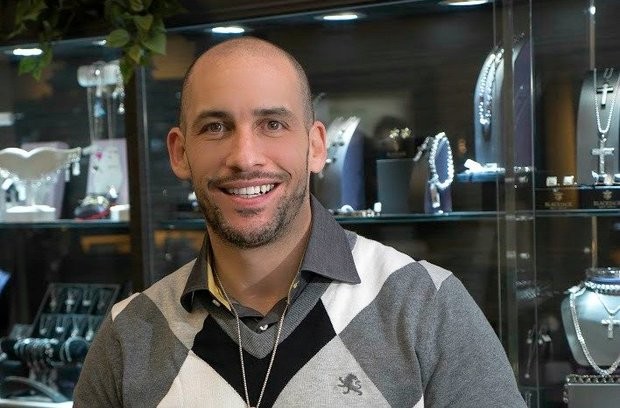 Cory Schifter, owner of Casale Jewelers, is always looking for a "fun way" to raise money for charity, his "Race for the Ring" competition among them. Three couples competed for a $10K engagement ring in the 7th Annual 'Race to the Ring' held by Staten Island's Casale Jewelers Friday.

NY1's Lisa Voyticki shows us how far the lovebirds were willing to go for the prize.

The road to the altar can be an uphill battle, but when it comes to a free engagement ring, some couples will do almost anything.

That was the scenario Friday morning at the Hilton Garden Inn as three couples competed to win a $10,000 engagement ring during the seventh annual "Race for the Ring," sponsored by the Dongan Hills-based Casale Jewelers, owned by Cory Schifter. Couples looking to tie the knot can face-off for a chance to win a free engagement ring.

Couples can upload their pictures to the store's Facebook page to enter the contest.

The highest ranking lovebirds with the most votes will move onto the next round.

The winning pair will take home a diamond engagement ring valued at $10,000.

STATEN ISLAND, N.Y. -- If you're thinking about popping the question to your significant other any time soon, you may want to enter Casale Jewelers' seventh annual "Race for the Ring" contest where one couple will walk away with an engagement ring worth $10,000.

"The event is fun. It's different. It's something nobody has ever done before," said Cory Schifter, owner of Casale Jewelers in Dongan Hills. STATEN ISLAND, N.Y. — They say diamonds are forever and recently Cory Schifter of Casale Jewelry made diamond memories that will last forever.

Schifter, who owns Casale in Dongan Hills, was one of an elite group of 17 jewelers from across the nation — and the only one from New York City — selected by the diamond company De Beers to tour Victor Mine, the most productive diamond mine in the world, located in Northern Ontario.

Victor Mine was opened in 2007 and has since recovered more than 5.6 million carats of diamonds.

The participants were also inducted into the Forevermark Carat Club, launched last year, for selling the most 1ct or more diamonds in the country out of close to 400 stores. Cory Schifter of Casale Jewelers has created a Muhammad Ali line of inspiring jewelry and will donate part of the proceeds to the Parkinson's Foundation.

Couples from across the city headed to Staten Island for the chance to 'race' towards an engagement ring. NY1's Shannan Ferry shows us what this unconventional way of popping the question is all about.

Hopping into a bouncy house and bobbing through whipped cream pies. That may not be the conventional path some couples expected to take on their way to the altar, but several of them dove right in Friday for the chance to tie the knot.

Cory Schifter, owner of Casale Jewelers, is hosting the 6th annual Race for the Ring where one lucky couple will win a Verragio style 7075R from the Insignia Collection set with a Stunning Round Brilliant cut diamond in the Center valued at $10,000. Each year has a different spin and Schifter and the race sponsors feel this will be there best year yet.

Love is in the air, and for local shops like A.F. Bennett Salon & Wellness Spa that means business is booming too.

"Our sales will generally peak about 30% higher than a normal week, during this week," said Frank Bennett, who is an owner at A.F. Bennett Salon & Wellness Spa.

Some get pampered from head to toe before spending quality time with their valentine.

"I'm going to the Marc Anthony concert tonight with my husband so I'm getting my hair and my make up done!" said Alice Montalvo-Acre.

Others sneak in some relaxation with their sweetheart downstairs at the spa.

Local Shoppers Out in Full Force on the Day after Christmas - December 26, 2015

The hustle and bustle of the Christmas shopping season may be over, but businesses are still seeing a lot of customers.
Dozens of post-holiday shoppers filed into Casale Jewelers in Dongan Hills on Saturday.
While NY1 didn’t interview anyone returning gifts, we found several customers wearing new watches and rings they'd received.

Race for the Ring comedy night set for April 14

In this 2015 file photo, Team Green couple Timothy Stack and Stephanie Tush race to complete a borderless puzzle as part of the Casale Jewelers' Race for the Ring competition at the Hilton Garden Inn. (Staten Island Advance/Vincent Barone)

In the last few months, I've co-chaired fundraisers for two not-for-profits on Staten Island: The Neptune Ball for the Snug Harbor Cultural Center and Botanical Garden in June, and the Fourth Annual Fashion Show for the St. George Theatre in November.

In 2008, Small Business Saturday was created to highlight small, neighborhood businesses, and to encourage customers to support the local economy.

The Staten Island Chamber of Commerce launched its annual "Passport to Staten Island" contest Tuesday at Casale Jewelers in Dongan Hills, to encourage localized shopping, as a lead up to "Small Business Saturday."

Casale Jewlers Searching for Couple of the Year - October 25, 2015

Casale Jewelers hosted a party earlier this week for customers in its "Couple of the Year" social media competition.

The winners will score a free date night in the city, complete with a limo ride, dinner and a show.

Casale will also donate $250 to the winning couple's non-profit of choice.

The pendant was carved in the shape of a No. 1, Acierno's basketball number, on the front and St. Christopher on the back.

Casale Jewelers in Dongan Hills is holding its 5th Annual Race for the Ring where couples can register online for the chance to compete for a $10,000 diamond Verragio engagement ring.

Some couples peruse jeweler after jeweler for their engagement ring; others might thrift for the perfect vintage piece. And then there are the Race for the Ring contestants, who prefer to lay it all on the line for a chance to win a dazzling designer ring.

The ConstructRELIEF Foundation and Casale Jewelers, Dongan Hills, are bringing back their annual Winter Wonderland for a weekend of family fun.

Casale Jewelers gives back to community with Sharing is Caring Giveaway - Nov 18, 2014

Players and Coaches of the USC Knights visited City Hall on October 7th for a special ceremony celebrating their victory in the U12 Championship game of the inaugural Borough Cup. The Knights were invited by Council Member Andrew Cohen of the Bronx, who presented the team with a City Council Proclamation in honor of their achievement.

- Casale Jewelers - Schifter has been selected for his foresight, his creativity and endless need to make the community a better place. January 17, 2014

Cory Schifter, owner of Casale Jewelers, is hosting the third-annual Race for the Ring, tentatively scheduled for March 22.

Small Business Saturday a success at Casale Jewelers who plans to give back to the community.

Sep 8, 2012 - Staten Island's Casale Jewelers will get marketing help from two industry giants as one of five winners of the national "Big Break for Small Business" contest.

Small Businesses Get Tips from Facebook and American Express

Staten Island jeweler may get a 'big break' from American Express

Aug 21, 2012 – Casale Jewelers is one of 10 finalists in the nationwide "Big Break" competition launched by American Express and Facebook.

Dancing with the Stars on Staten Island | SILive.com

Jul 18, 2012 ... Students learned the ins and outs of retail business from Cory Schifter of Casale Jewelers earlier this month. "These kids have come a long way ...

After creating business plans, products and receiving their own money, summer campers at a Staten Island school say all they need are customers as their student-run stores open for business. 07/18/2012 03:45 PM

Staten Island jeweler has lovers racing for the ring | SILive.com

May 2, 2012 ... Staten Island Advance/Hilton FloresDuring a visit to Casale Jewelers in Dongan Hills, Lyndsay Reyes shows off the jewelry that she ...

Celebrating a School at the Staaten | SILive.com

Business students get lesson from pro at PS 54 | SILive.com

Sep 16, 2009 ... One of the new owners of Casale Jewelers in Dongan Hills, Schifter will make customized and customer-designed jewelry a specialty of the ...

Nov 25, 2009 ... Schifter will be rekindling the annual light show at the Casale Jewelers store, continuing the former owner's fund-raising effort on behalf of the Cooley's Anemia Foundation.

Angela shows off her engagement ring to Melissa DeGregoria of ...

Dec 10, 2009 ... Kristine Garlisi, a director at the Nicotra Group, which owns the Hilton Garden Inn, read on Facebook that Cory Schifter had recently purchased ...

Dec 24, 2009 ... The holiday light display from Casale Jewelers sheds a warm glow over the neighborhood at dusk yesterday in Dongan Hills. STATEN ISLAND ...

Sep 16, 2010... ring for his girlfriend, Caitlin Griffin, at Casale Jewelers -- the specialty jewelry store replaced the ring, lost in a Disney World lake, at no cost.

Casale Jewelers announced Saturday that it will host its 2nd-annual fundraiser for the Cooley’s Anemia Foundation at their Dongan Hills store in two weeks. 12/04/2010 03:38 PM

We have jewelry professionals ready to help.